Posted at 18:53h in news by Tony Attille 0 Comments
Share

Mary Seacole was a pioneering nurse and heroine of the Crimean War, who as a woman of mixed race overcame a double prejudice.

Mary Jane Grant was born in Kingston, Jamaica in 1805. Her father was a Scottish soldier, and her mother a Jamaican. Mary learned her nursing skills from her mother, who kept a boarding house for invalid soldiers. Although technically ‘free’, being of mixed race, Mary and her family had few civil rights – they could not vote, hold public office or enter the professions. In 1836, Mary married Edwin Seacole but the marriage was short-lived as he died in 1844.

Seacole was an inveterate traveller, and before her marriage visited other parts of the Caribbean, including Cuba, Haiti and the Bahamas, as well as Central America and Britain. On these trips she complemented her knowledge of traditional medicine with European medical ideas. In 1854, Seacole travelled to England again, and approached the War Office, asking to be sent as an army nurse to the Crimea where there was known to be poor medical facilities for wounded soldiers. She was refused. Undaunted Seacole funded her own trip to the Crimea where she established the British Hotel near Balaclava to provide ‘a mess-table and comfortable quarters for sick and convalescent officers’. She also visited the battlefield, sometimes under fire, to nurse the wounded, and became known as ‘Mother Seacole’. Her reputation rivalled that of Florence Nightingale.

After the war she returned to England destitute and in ill health. The press highlighted her plight and in July 1857 a benefit festival was organised to raise money for her, attracting thousands of people. Later that year, Seacole published her memoirs, ‘The Wonderful Adventures of Mrs Seacole in Many Lands’. 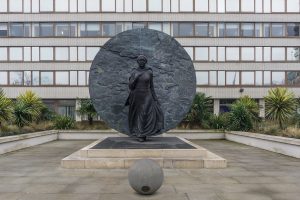 On 30 June 2016, a memorial statue of Mary Seacole was unveiled by Baroness Floella Benjamin OBE in the gardens of St Thomas’s Hospital; the UK’s first in honour of a named black woman.

The unveiling followed a 12 year campaign for funding by the Mary Seacole Memorial Statue Appeal, raising over half a million pounds with much coming through small donations from schools, nurses and army units, emphasising the popularity of the appeal across a wide spectrum of British society. In November 2015, the Chancellor of the Exchequer announced the donation of £240,000 of LIBOR banking fines to pay for the installation.